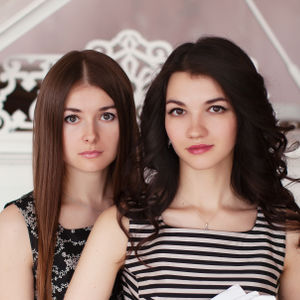 Sofia Sakhnova and Antonina Luzko completed their master and PhD programmes in “Piano Performance” at the Gnessins’ Academy of Music in Moscow in 2016. The idea of creating a piano duo, which they called “ST-Duo”, has been constantly growing during their studies. “ST-Duo” debuted on the stage of The Gnessin' Academy of Music in October 2016.

Antonina and Sofia actively participate in concerts, performing on stages of Moscow International House of Music, Tchaikovsky Conservatory, Tchaikovsky Concert Hall. “ST-Duo” collaborates with several charity foundations such as “International Y. Rozum Charity Foundation”, “Vladimir Spivakov International Charity Foundation”, “Open Sea” foundation and others. Sofia and Antonina participate in projects of the Moscow Youth Philharmonic Society. In March 2017 “ST-Duo” had the honour of performing at the opening of the “II Russian Ball” in Karlovy Vary, Czech Republic. In 2019 Sofia and Antonina performed on a stage of Russian House in Berlin.

The repertoire of “ST-Duo” includes music from various epochs as well as their own transcriptions and arrangements for two pianos, new music interpretations and adaptations.  For example, in March 2017, in Moscow was the premiere of “Fantasies on themes from Gershwin’s “Porgy and Bess” for orchestra and two piano”, which was performed by “ST-Duo and S. Milstein’s Jazz Orchestra “Dance Land”.

Today Sofia Sakhnova and Antonina Luzko are well established piano performers of the highest class, rapidly gaining their popularity in both Western and Eastern Europe.