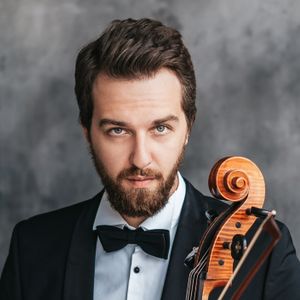 “A mesmerizing, heroic soloist” (The Strad), Alexander Ramm is one of the most sought-after cellists of his generation. Having emerged on the international stage as the silver medalist of the 2015 Tchaikovsky Competition, he has recently attracted much attention and critical praise with his recording of Benjamin Britten’s Cello Suites, which was made with titanium pins in his left elbow following a freak accident. Enthusiastic comparisons to Rostropovich (The Strad, Pizzicato.lu) and the Listeners’ Choice award of The Violoncello Foundation have placed this album among the most acclaimed recordings of cello repertoire.

Almost straight after the Tchaikovsky cello competition, Alexander was invited by legendary Russian Firma Melodia to record the Shostakovich concerto with the Tatarstan Symphony Orchestra under the baton of Maestro Alexander Sladkovsky.

Alexander Ramm was born in Vladivostok, then moved to Kaliningrad and studied at Glière Children Music School (class of Svetlana Ivanova). He continued his education at Chopin College of Performing Arts in Moscow (class of Maria Zhuravlyova). In 2012 Alexander graduated from Moscow Conservatory (class of People’s Artist of the USSR Prof. Natalia Shakhovskaya,). Alexander also studied at Hochschule für Musik Hanns Eisler in Berlin with Frans Helmerson.

Generous support from the Amsterdam-based Schreve family and Ms. Elena Lukyanova in Moscow has allowed Alexander Ramm to own a cello made by the Cremonese luthier Mr. Gabriel Jebran Yakoub.

“He certainly displays an uncommon affinity for the music, its style and its emotional ebbs and flows…. The Third Suite has an unmistakable sense of valedictory, with a mellow melancholy that seems to get to the heart of the music.”– The Strad, 2019

“His recording [Britten Cello Suites nos. 1–3] brings together restrained joy and contrasting earnestness, moments of „light-heartedness“ with those of meditation. His powerful yet delicate tone captures the essence of the Suites.” – Der Spiegel

“...breathtaking playing… Ramm’s interpretation justifies the direct comparison with Rostropovich’s legendary Decca recordings… A more than successful debut of a young cellist… his colorful and lyrical playing brings him in the first league.” – Pizzicato.lu

“… an extraordinary performance … His intonation was incredibly secure and his virtuosity almost beyond question, even in the most demanding passages where the cello sits at the very top of its register. Power, pace and passion were the features of the fast music, but when it briefly relented, there was a real depth of feeling to the soaring, chant-like melody of the second movement… redolent of Steven Isserlis in his youth!”– Arcana.fm

“In the lyrical opening of [Sinfonia Concertante] we were made aware of his lovely, singing tone quality, projecting strongly into the hall, and as this complex work developed so did his virtuoso technique become excitingly evident. For the whole, quite long, span of the three movements Ramm held the attention unerringly through his total emotional commitment.” – Seen and Heard International

“Alexander Ramm … was a mesmerizing, heroic soloist in the fearsome Symphony-Concerto. Playing from memory, he made a massive, Rostropovich-sized sound in the endless rough-and-rumble of the central scherzo but brought great decacy to the royshop variations of the finale. Even in the outsize candenza he clarified and justified Prokofiev’s writing at its most prolix and technically challenging with an unarguable force of will, charisma and assurance. He is quite a phenomenon.”– Peter Quantrill, The Strad, 2017